After 28 years of collecting lids, tabs, and connectors, Tilda Shalof was ready to turn them into a work of art. 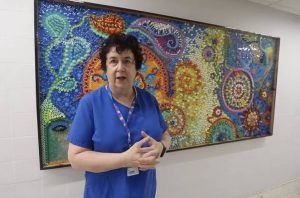 Tilda Shalof finds beauty in unusual places. For 28 years, she worked as a nurse in Toronto General Hospital’s intensive care unit. Instead of throwing away the little plastic lids, tabs, pins, levers, screws, and connectors that she used every day (all of which were clean and had not come into contact with patients), she put them in her pocket and took them home. She was drawn to their vibrant colors and interesting shapes, and for a few years they served as interesting sorting toys for her young sons.

As the years went by, Shalof’s collection grew enormously and she had many bags of plastic pieces stashed at home. Finally, during the summer of 2015, she began transforming them into a work of art, aided by artists Vanessa Herman-Landau and Bradley Matson. The result is a magnificent mural that measures 4 feet by 9 feet, and now hangs on the wall of the hospital where Shalof once worked.

While I recoil from the thought of hoarding so much plastic for so many years, I can’t help but be fascinated by Shalof’s mural. A video by the Toronto Star shows her

explaining the various pieces. Looking at the center of the big circle on the left, she points out a yellow top from the adrenaline used during cardiac arrest. The orange circle in the very middle is the top of a blood culture bottle, and the little purple tails are the tops of lancets used to test blood sugar. In the lower left corner, in the speech bubble, are caps from medication to avoid rejection when an organ is transplanted.

Shalof says she remembers many of the patients she worked with and that her mural is a way of saying goodbye to them after retiring from her position in ICU. In 2016 she told the University Health Network blog: 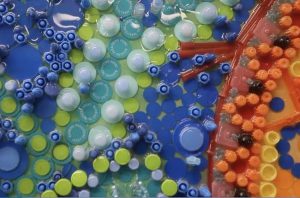 “Mindfulness is the key message in the mural. You may not see value in these small pieces alone, however when you put many of them together with a helpful imagination you can turn these little fragments into something of value.”

Shalof now works in interventional radiology, but she continues to collect plastic bits (albeit at a slower rate because of the change in position). Her creativeness doesn’t stop there, though. She is also a published author of several books, including bestseller A Nurse’s Story.

Great fun, and so inventive.