In the lead up to Christmas, Southland Disability Enterprises processed a variety of sex toys and medical waste, including catheters with their needles still attached.

And although it wasn’t unusual to find the items incorrectly recycled, finding more than 30 sex toy in one months was strange, said general manager Hamish McMurdo.

The issue wasn’t that the items were sex toys, it was what they were made out of, McMurdo said.

McMurdo added that his staff were finding items that should not be recycled on the sorting line too often, he said.

“Every bucket load there is something coming down that line that isn’t supposed to be there,” he said.

“We find medical waste about two or three times a month.” 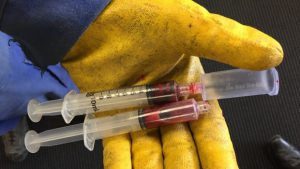 The items were also potentially dangerous to staff who need to sort the recycling.

“We sort the recycling by hand and our gloves are not needle proof. When people recycle the wrong thing it can be dangerous for our staff.

“All our staff have to have hepatitis shot as a precaution.”

But it wasn’t just unwanted sex toys and medical waste causing problems on the sorting line, with McMurdo saying that people made recycling mistakes “through thoughtlessness”.

“It all comes down to whether people care. We are still finding used nappies in the recycling, I mean common sense tells you that a used nappy can not be recycled.”

The recycling mistakes were also making a hold in WasteNet’s wallet, with more than $180,000 spent on correctly sorting the items in 2016.

“We have found bio hazard bags with catheters in them. People see the plastic and assume it can be recycled.”

The biggest mistakes were being made by the average person who didn’t check whether items could be recycled, she said.

WasteNet Southland and Southland Disability Enterprises launched a new campaign, called the Dirty Dozen, at the beginning of January in an effort to educate people on how to recycle correctly.

The 12 rule system was designed to minimise commonly made recycling mistakes, Peterson said.