A hospital worker toils for about 12 hours a day to earn a decent living for his family. Now, imagine he accidentally gets pricked by a syringe or needle of an HIV positive.

This is an occupational hazard of a job that can have serious consequences for his future. A seemingly simple job if not done with extreme caution can cost him his life.

Two students of The Millennium School, Dubai, felt that sorting through biomedical waste is a job that should be done by a machine and not by humans. With this in mind, they have designed and built a robot to collect, sort and transport biomedical waste. The machine will reduce unnecessary casualties of infection/negligence while handling patients infected with contagious diseases. 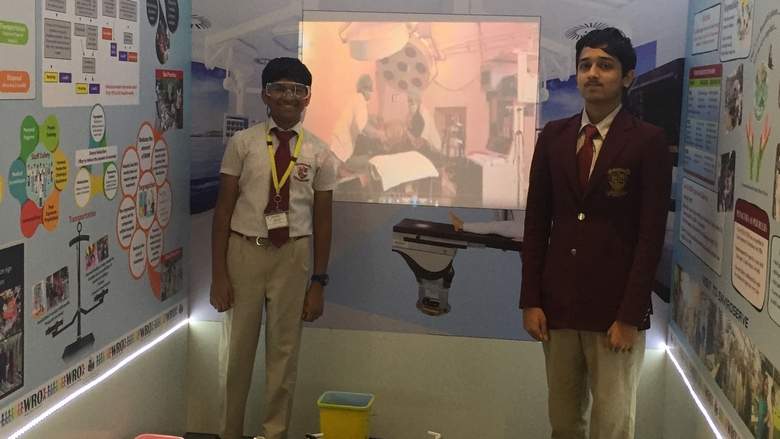 Two students of The Millennium School felt that sorting through biomedical waste is a job that should be done by a machine and not by humans. They look very proud, and so they should. Congratulations guys!

The project called ‘Terra Nova’ was made by students Arjun Bhorkar of grade 10 and Aaron Shabu of grade 8 under the guidance of coach Sharon Bhorkar. Terra Nova was widely appreciated at the National Robotics Olympiad 2016 organised in Abu Dhabi and the team has also been selected to represent the UAE national team for the World Robotics Olympiad 2016 in New Delhi, India.

“At The Millennium School, Dubai, students are taught to look at problems critically from all perspectives. We are encouraged to think of innovative ideas to make the world a better place,” said Arjun.

“We are grateful to our parents, teachers, our school and the organisers of the National Robotics Olympiad in the UAE for having faith in our project Terra Nova and giving us this opportunity to make a difference in this world,” said Aaron.

The World Health Organisation (WHO) has estimated that the illegal or sometimes accidental reuse of medical syringes and other contaminated equipment have caused innumerable unnecessary deaths by spreading contagious diseases like AIDS, hepatitis A, hepatitis B, bird flu, and mad cow diseases. These are commonly referred to as an ‘occupational hazard’ amongst medical workers. The issues were so serious that many governments passed laws and penalties as early as 1990 to help curb it.